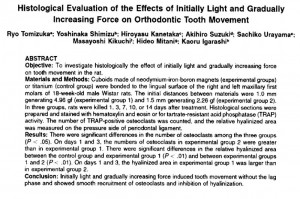 Very interesting, right! But it makes no sense. What it means is that to move teeth the fastest and most efficient way possible, you should start with very light forces, and slowly increase the forces after the initial movement.

This means that the old days of heavy wires tied in to the brackets with rubber band are out, and the era of passive self ligating brackets is here.

The system that we chose to use is Damon

The system uses the concept that light forces work with the body, while heavy forces prevent the formation of new bone and prevent tooth movement by closing up the tiny capillaries in the bone around the tooth. 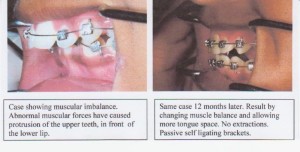 The brackets have a gate built into them to hold the wire, so it is no longer necessary to use the elastic ties. The advantage of this is that it is easier to clean, and less food gathers around the teeth.

We have chosen the Damon system for these reasons, but there is another compelling reason which outweighs the technical details.

Because of the light forces that are in play, the lack of friction in the brackets allows the teeth to move along the wires under the force of the tongue and lips. This is a similar system to what is happening during tooth eruption.

By using the damon brackets, we can determine where the muscle forces in the mouth will move the teeth. The major rule of orthodontics is that MUSCLE ALWAYS WINS. Passive self ligating brackets are an appliance that allows us to find the balanced position for the teeth. Unusual movements tell us about an imbalance that would be a problem at the end of treatment. Understanding these rules has allowed us to achieve amazing results by using the power of the muscles to close open bites and realign teeth in situations that would generally be considered the province of surgical orthodontics.

The Damon Q bracket is new to the Damon system. It is an exciting development, because the bracket does not stick out from the tooth, lowering the lip pressure on the tooth, and allowing us to move the teeth further forwards for a fuller smile .

The new Damon aesthetic braces will be available soon.

Do I need to have all teeth out to have Implants? Orthodontics